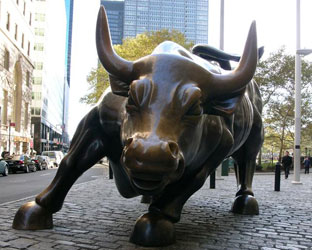 As trading entered the final half hour on Wall Street, one thing was clear: U.S. financial markets were sailing southward.

Yet, the biggest radio industry players were enjoying upward momentum.

At the Closing Bell, iHeartMedia shares were up 10.3%, to $1.60. It’s a step in the right direction for the nation’s No. 1 owner of radio stations, and brings it back to where IHRT shares were in mid-July.

Still, iHeart is a far cry from where it sat in late March, when shares approached $3.85.

The gain for IHRT shares is likely tied to Wednesday’s announcement from subsidiary company Clear Channel Outdoor Holdings that its Clear Channel International B.V. “up-sized” and priced an offering of $150 million aggregate principal amount of additional 8.75% Senior Notes due 2020 — an up-size of $25 million over the amount previously announced.

Meanwhile, Cumulus Media shares were up 5%, to 43 cents, ahead of the company’s quarterly earnings report, which is due following Monday’s Closing Bell on Wall Street.

Meanwhile, Townsquare Media turned southward, as did other media companies, as a report from analyst Brian Wieser at Pivotal showed national ad dollars dipping in Q2, with no turnaround in sight.

Meanwhile, the challenges continue to Pandora Media, with its stock dipping 7.5% to $8.02. Also of concern: Veritone, which began trading on Nasdaq in mid-May and has dipped from $11.67 in just the last 30 days. While Veritone’s gross profit jumped to $3.75 million from $1.71 million in Q2, its net loss attributable to common shareholders widened to $25 million, from $7.32 million a year ago, prior to the issuance of shares to the public.